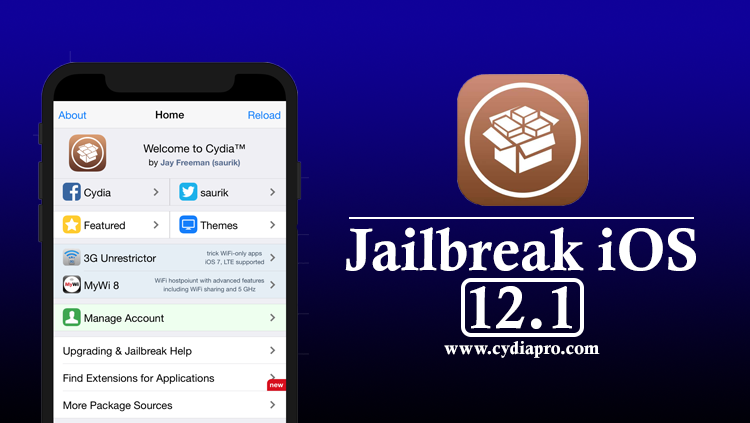 The latest iOS 12.1 was released on Tuesday, the October 30th in 2018. Apple has given you the most promising feature, the Group FaceTime through this update. Although Apple’s plan was to offer you this feature in the iOS 12, they couldn’t do that. However, they have succeeded it this time. This latest version of iOS is developed with many new features and bug fixes to the iOS 12. One of the most impressive features is the added emoji set over 70 in numbers. In addition, you are given the features of Depth Control in Camera, Dual SIM possibility, and other bug fixes. People who are interested can upgrade to this iOS version by Settings > General > Software Update.

Jailbreak iOS 12.1 is the latest curiosity among the jailbreak fans. Jailbreak is the foundation to customize the performance and the look of the iPhones, iPads, and iPod touches. The process inside the jailbreak is, accessing the iOS system files. You get the chance to modify the core features of your iDevice simply by jailbreaking the device. The benefits you get after jailbreaking are the ability to download third-party apps and the ability uninstall bloatware apps. Cydia Installer comes up on stage where the place you need to download third-party apps. Yes, Cydia is the third-party app store which gives third-party apps to the jailbroken iDevices. Like all the other jailbreak versions, Jailbreak iOS 12.1 also comes bundled with its Cydia Installer.

Speaking of the truth, Jailbreak iOS 12.1 is currently at its development stages hoping to be released soon. The jailbreak developer teams such as Pangu, Yalu, Alibaba and the individual hackers like CoolStar are currently working on it. Therefore, if you want to get Jailbreak iOS 12.1, you have to wait a little longer with patience. However, you have a good news as well. The most awaited jailbreak iOS 12 has already achieved! Yes, it’s true.

The world famous Alibaba Pandora Labs was the first to demonstrate a jailbreak iOS 12 tool. They released this information about their success just after a couple of days releasing iOS 12. Later on, the Luca Todesco who is the developer of Yalu jailbreak tweeted his success as ‘pwned’ as well. And now, the famous Pangu team has also demonstrated their success in jailbreak iOS 12. And most probably, it will be released within 2-3 months.

It’s true if I introduce Cydia Jailbreak as the soul mates because both jailbreak and Cydia are inseparable. Jailbreak is the way of installing Cydia, as such, we can’t install Cydia on the non-jailbroken iPhones, iPads, and iPod touches. Cydia is a third-party app store which has the content of third-party apps, tweaks, extensions, games, add-ons, and the latest themes. It allows you to customize the device performance with these apps and tweaks. And also you can beautify the look of your device by using the latest themes in the Cydia store.

The iDevice owners who have compatible devices with Jailbreak iOS 12.1, must have already received the software update notification by now. If any case you didn’t receive the notification, then you can go to Settings > General > Software Update, and update to the latest iOS 12.1. The following devices are allowed to update iOS 12.1 as well as to download Jailbreak iOS 12.1.

Yes, the jailbreak is a safe activity you can implement on your iPhone, iPad or iPod touch. But the safeness depends on the way you execute it. So make sure you follow the jailbreak instructions properly.

No, unfortunately, the Jailbreak iOS 12.1 is not yet available in public. You will be able to experience it approximately within 2-3 months.

03. What benefits do I get from Jailbreaking my iOS 12.1 device?

You can install third-party apps and tweaks so that you can add an extra functionality to the device. And most of all, you get the chance to remove the bloatware from the device.